The Higher Education Policy Institute (HEPI) and the social mobility charity Brightside are jointly publishing a collection of essays by senior higher education figures entitled Where next for widening participation and fair access? New insights from leading thinkers.

Contributors include: Kirsty Williams AM, the Cabinet Secretary for Education in the Welsh Government; Vonnie Sandlan, the former President of NUS Scotland; and Peter Horrocks, Vice-Chancellor of The Open University. Les Ebdon, the Director for Fair Access, has contributed a Foreword.

The policies put forward in the chapters include: much bolder contextualised admissions policies for highly-selective universities (with AAA+ offers typically being reduced to CCC), more support for people in care with the potential to benefit from higher education and new Personalised Learning Accounts to meet demand for more flexible lifelong learning. 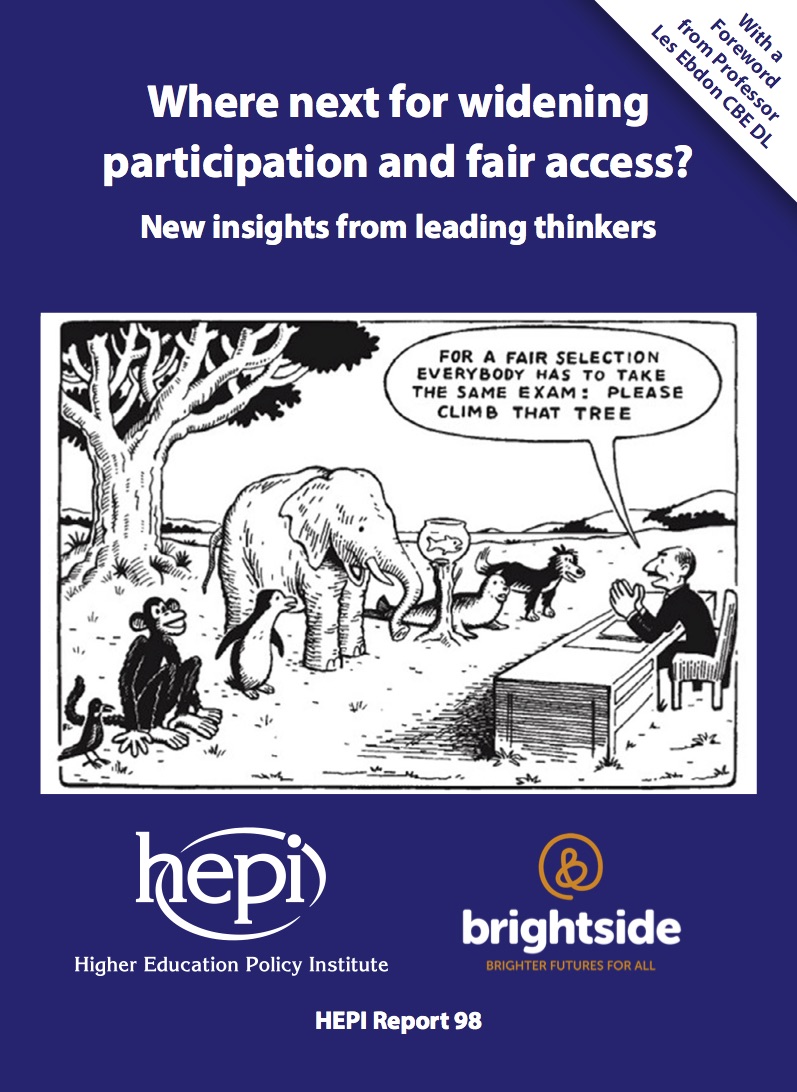 The Director of HEPI, Nick Hillman, who wrote the Introduction to the collection, said:

Despite the progress in opening up universities to people from under-represented groups, we have miles left to go. The current changes to higher education, including the closure of the Office for Fair Access, mean we could be in for a bumpy period. It is time to take stock by learning from all those working with disadvantaged people inside and beyond universities, being willing to change tack when initiatives are ineffective and incorporating new insights from areas like behavioural economics.

If we are serious as a country about having a higher education system that unlocks everyone’s potential rather than just helping a privileged minority, then bold proposals like radically reducing entry requirements for disadvantaged students will need to be embraced by universities and government.

In his Foreword, Les Ebdon, writes:

While we celebrate improvements in access for disadvantaged young people, we must not forget that for older students and those studying part-time, the trend is steeply downward. And we must not allow headline figures about rising applications to distract us from the troubling issues of non-completion rates and different degree and employment outcomes, particularly for students from Black and Minority Ethnic backgrounds.

‘So my answer to the question “What next?” is this: we need more progress, more quickly. Incremental change is just not enough. Every year that we do not have truly fair access is a year in which yet more talented people are let down by a system that should lift them up.

A short extract from each of the chapters is below.

‘The ability to make confident and informed decisions is enhanced by greater social capital, yet developing it must begin well before the age of 16. Currently, the most intensive outreach work begins too late. Social capital should be nurtured throughout university too.’

‘If we accept that FSM-eligible [Free School Meal] children face significant economic and social obstacles to high achievement at school, it can be argued that it is not fair to set the bar for access to a top university at AAA+ for FSM and non-FSM children alike. A fairer bar for FSM children might be CCC and above, which 14 per cent of FSM children manage to achieve.’

‘Care leavers may be unable to make the split-second decisions this [the university application process] often requires, requiring approval from their local authority for changes to their Pathway Plan. And while 365-day accommodation helps local authorities fulfil their duty to provide accommodation for care leavers during vacations, a deserted campus on Christmas Day is a lonely place to be.’

‘Universities can and should be more imaginative in thinking about their role in supporting schools and raising attainment. The prospect of compulsory university sponsorship of schools has not been generally well received in the higher education sector. … King’s doesn’t run KCLMS [King’s College London Mathematics School], but our infrastructure, widening participation resource and academic expertise have enabled headteacher Dan Abramson to develop a remarkably successful school in Lambeth.’

‘Much of the debate overlooks the fact that school type is not the only measure of disadvantage, and that students attending independent schools can also, for example, suffer an interrupted education, be young carers or meet other widening participation criteria.’

‘At Aston University we believe dropping out represents the worst outcome for any student. Not every student with problems will drop out, but the ones that do so are probably the most troubled and need the most help. While managing down drop-out rates improves both a university’s financial and league table positions, at Aston we have particularly focused on the human cost to students via personal setback.’

‘The current approach in England is to promote greater student belonging via more inclusive teaching and learning. This is crucial and informs the philosophy of the innovative work at the universities of Cape Town and Berkeley. However, it shies away from targeted work that addresses the specific challenges that widening access learners face in achieving their potential in higher education.’

‘So, although widening participation appears to be in rude health, is it actually like Aimhigher before the fall? To help ensure it is not, the Office for Students should make the establishment of a national evidence unit one of its first priorities. It need not take much of the £833 million to do so.’

‘Activities which “speak to the heart” may be more effective than some forms of information that “speak to the head”. This is just one of a range of strategies for making university more attractive which we plan to explore over coming years.’

‘It seems clear that in order to develop the Scottish approach to fair access and to achieve the ambitions for fair access to higher education, it is the college sector in Scotland that will be the linchpin for success to rest upon. It is the same college sector that can demonstrate good practice from which our universities could afford to learn a thing or two.’

‘I believe that in being the first in the UK, indeed perhaps the first in Europe, to deliver parity, fairness and consistency in maintenance support across modes and levels really does move us [Wales] to a system that provides for all.’

‘A more transformative step would be to develop a system of lifetime Personalised Learning Accounts to offer financial support to employees wanting skills training to suit their needs. This would drive a real culture change in lifelong learning and help open up education and deliver the Government’s agenda.’

‘Simply compelling a greater range of people into systems that comply with long-established ideas of what higher education looks and feels like is likely to be met with indifference at best and outright alienation at worse. The debate about how best to expand opportunities should be less about the value of alternative providers and more about the need for alternative provision.’