The UK’s pipeline of creative talent is fracturing because Art, Media and Design are being downgraded in schools, according to a new report – A crisis in the creative arts in the UK? – from the Higher Education Policy Institute by Professor John Last, Vice-Chancellor of Norwich University of the Arts (NUA).

Research conducted among local schools shows the Government’s decision to leave the Arts out of the ‘core’ subjects in the English Baccalaureate (EBacc) is leading to lower pupil attainment, less funding and more teacher recruitment challenges. 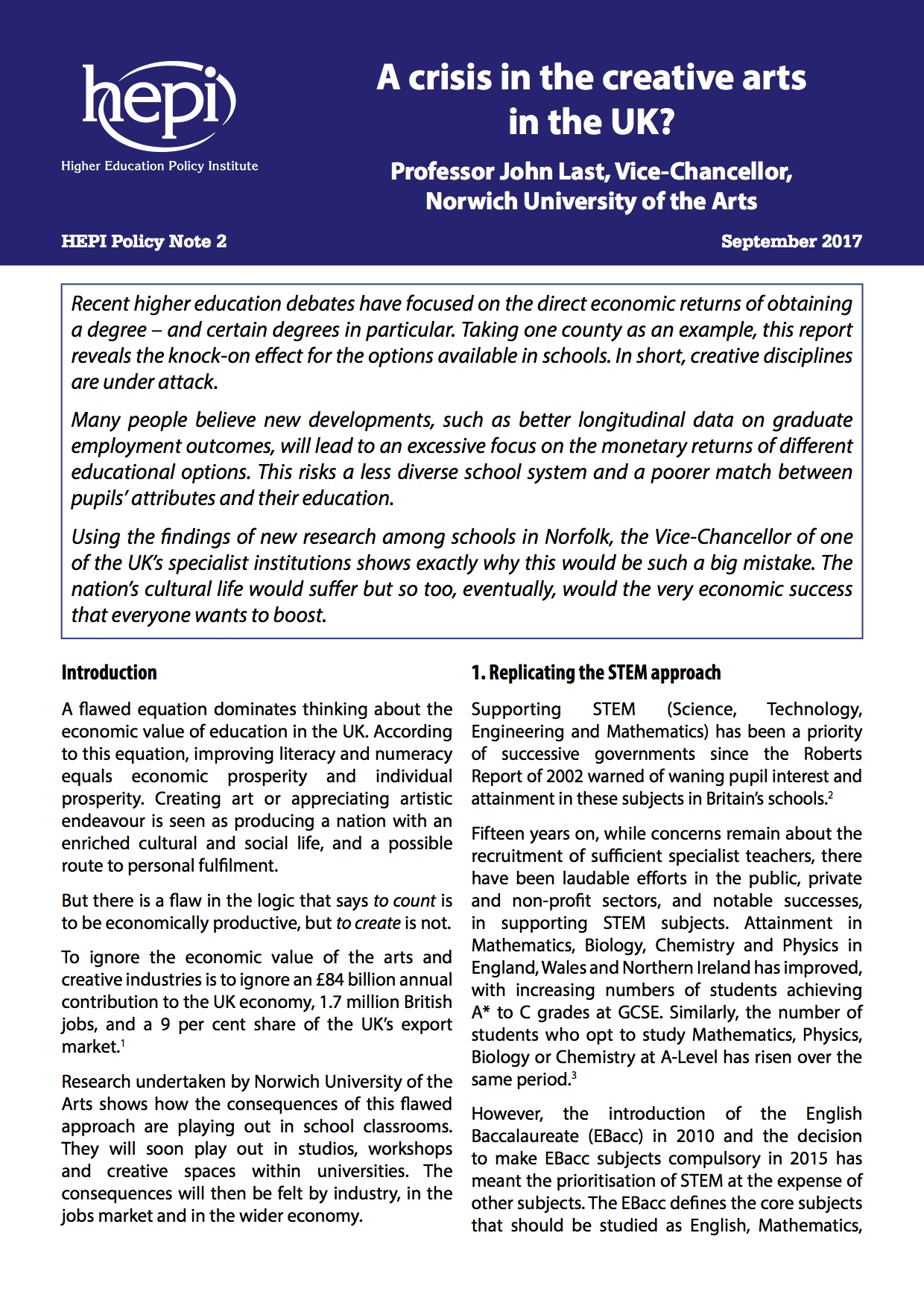 ‘The aim of education in the past was to offer a balanced curriculum of arts, humanities and sciences. But the introduction of the English Baccalaureate in 2010 set us on a path where creativity falls outside the “core” of our children’s education.

‘The consequences of this downgrading of creative subjects are already being felt – in the choices pupils make about their GCSE options, in the practical creative skills they develop during their education and in the difficult decisions headteachers are making about funding and resources.

‘The economic value of the arts has been put at £84 billion a year but is being overlooked where it matters. The creative industries account for 1.7 million jobs and fly the flag for British innovation overseas. We are in danger of fracturing the pipeline of future talent these vital industries rely on.’

‘Someone wise said it is science that lets people reach the age of 100 but the arts that mean people want to live that long. There is an economic imperative in protecting and improving the arts too.

‘The UK is widely seen as a place of great creative talent but that hasn’t happened naturally or without support. To flourish in the arts, pupils need nurturing, good teaching and access to excellent resources.

‘This timely analysis shows the scale of the problem. Everyone wants to continue strengthening the sciences, but it doesn’t have to be at the cost of other disciplines. Indeed, the UK’s future success depends on excellence in breadth and deeper links between the arts and the sciences.’

HEPI Policy Note 2, A crisis in the creative arts in the UK?, calls for ministers to offer creative education parity of esteem with STEM subjects (Science, Technology, Engineering and Mathematics).  Please note is it is embargoed to 00.01 hours, Thursday, 7 September.

The Higher Education Policy Institute was established in 2002 to shape the higher education policy debate through evidence. We are UK-wide, independent and non-partisan. We are funded by organisations and universities that wish to see a vibrant higher education debate as well as through our own events.