This guest blog has been kindly provided by Dr Andrew Hindmarsh, Head of Planning at the University of Nottingham. His responsibilities include providing management information and statistical returns to official bodies. Previously, he was Head of the Undergraduate Admissions Office at the University of Sheffield. He is also the Chair of the Board of a multi-academy trust in the East Midlands.

Accusing universities of ‘grade inflation’ has become a common pastime in political and media circles. What they mean is that the proportions of good degrees awarded have been going up, but it is referred to as grade inflation so that the preferred explanation (ie university perfidy) is built into the term that is used to describe the phenomenon.

First, the dataset confirmed that the proportion of graduates obtaining a first-class degree had risen by 10 percentage points in the period 2012/13 to 2016/17. The proportion of graduates obtaining either a First or an Upper Second rose by 7 percentage points.  (NB The dataset is slightly restricted, so the figures for the whole graduating population might be slightly different – see note at end.) 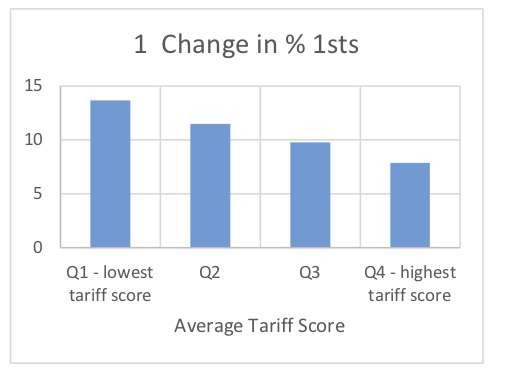 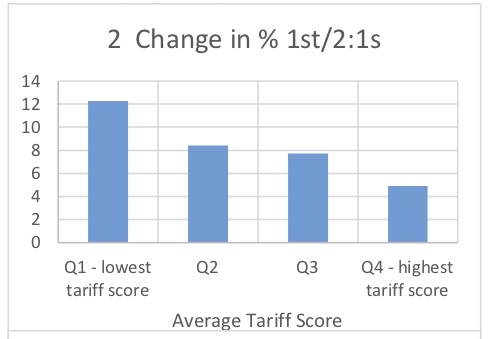 However, the changes are very different at different institutions with the biggest increases being 28 percentage points for Firsts and 24 percentage points for Firsts and Upper Seconds. These are very big changes. In order to understand more about what is going on, we plotted the change in the proportion of Firsts against the average tariff score of the students for all the universities in the dataset.

One explanation for this could be that the average tariff score has increased more at universities where the average score was lower to start with. If those low tariff score universities had had entry standards that had been rising faster, then you might expect there to be an impact on the subsequent attainment of the students. Graph 3 shows that this has not been the case. In fact, the average triff score of universities in quartiles 1 to 3 have all gone down, while only those in quartile 4 (the highest) have gone up.

So it does not look as though rising entry standards can explain the changes in degree classifications. 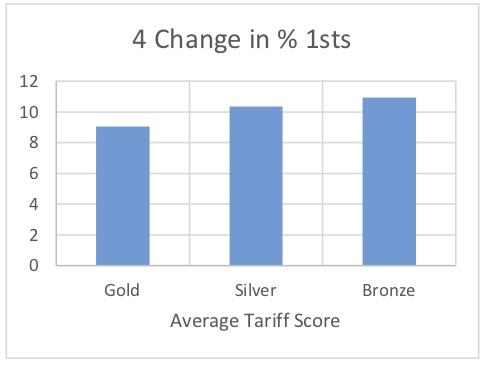 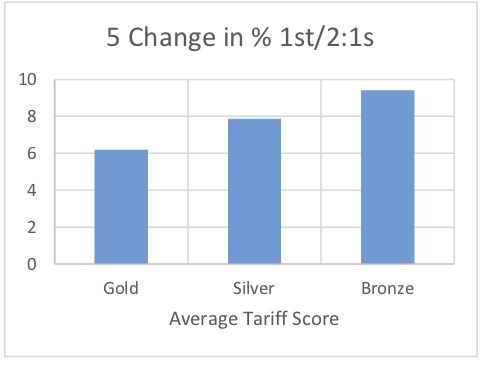 So what is going on?  There are plenty of hypotheses left which our database cannot test. One change that has been happening is an increasing use of the full range of marks, particularly in Arts subjects. In the past, there was a tendency to avoid giving high marks with those above 80 in the Arts being very rare indeed. These high marks are much more common in the Sciences, particularly the numerical sciences, where it is possible to achieve maximum marks on mathematical problems. However, many universities are now actively encouraging all subjects to use the full range of marks with the result that, when an average mark is calculated, this is more likely to fall above a particular class boundary as the higher marks pull up the average. This hypothesis also explains why the proportion of first-class degrees has risen faster than the proportion of 1st/2:1s as you would expect more of the high marks to be obtained by students already at or close to a first-class standard.

The conclusion must be that this is a complex subject and, while some explanations for changes in degree classifications can be ruled out, there are plenty more to be considered. The accusation that grade inflation is the cause needs to be justified with evidence rather than simply asserted as if it were a self-evident truth.